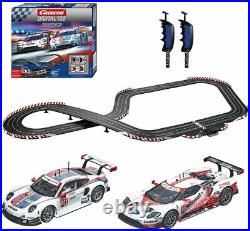 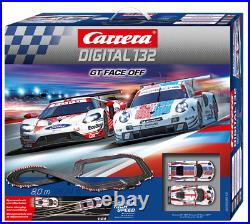 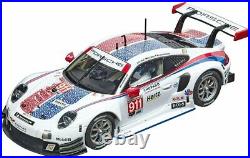 Full power ahead in the Carrera DIGITAL 132 GT Face Off set. The cult cars Porsche 911 RSR Porsche GT Team, # 911 and Ford GT Race Car No. 66 face each other in fast-paced races. The 510 hp Porsche was painted in the famous look by Brumos Racing.

The design of the successful US team has already brought Porsche luck at the 24-hour race in Daytona and given the team a podium finish. With its design, Ford pays homage to the victory of the Ford Mustang in the Rolex 24 At Daytona race in 1985. At Carrera, the mighty vehicles whiz at full speed over the 8-meter-long track. Carrera Digital 132 Benefits at a Glance.

DIGITAL 132 the racing tack system for the whole family: Discover the detailed vehicles, the digital accessories, the wide tracks on a scale of 1:24 and the right spare parts now in the store. Depending on the drivers ability and skill, the speed can individually adjusted with up to 10 levels. Simple vehicle coding using the manual control unit. Vehicles can be used on Evolution. Vehicles predominantly with front light and rear/brake light function. Pace car and autonomous car function. Adjustment option for the maximum speed and braking behaviour of the vehicles.

Pit stop lane as an accessory, maximum fuel tank capacity of the vehicles can be varied. Can be continually extended with Carrera track material 1:24. Experience true-to-scale driving fun in 1:24 for racing drivers from 10 years old: Up to four vehicles can line up for the race at the same time and fight for first place on this racing track system.

There are no limits to racing with the Digital 124 accessories because the digital extras provide a realistic racing feeling. When purchasing a racing track set, tracks or vehicle it doesnt usually end there and with good reason: The sensational possibilities of the range for DIGITAL 124 are overwhelming: From the driver display which displays the fuel tank contents, the number of pit stops and the current position, to the black box or ontrol unit the junctions of the racetrack: The selection of DIGITAL 124 accessories leaves no wishes desired for racing drivers. Double switches, hairpin turns and the pit stop lane make driving just as much fun as decorating with edge strips or flagpoles. The 2.4 GHz WIRELESS controllers should not be forgotten either for wireless control of the vehicles.

As well as the speedy accessories for the DIGITAL 124 racing track system, there are also suitable spare parts for the vehicles on the scale of 1:24. Digital 132 cars are digitally controlled and individually codable.

All Carrera Digital 132 cars can be used with Carrera Evolution. Tampo-printed, original and detailed cars. Realistic acceleration and braking action.

Historic design meets high-tech sports cars! With the Ford GT Race Car No. 66, the US automaker pays homage to the victory of the Ford Mustang in the Rolex 24 At Daytona race in 1985. To mark the 50th anniversary of the International Motorsport Federation IMSA, Ford has a new edition of the Ford GT sent into endurance racing.

The bolide was launched as an anniversary version with the starting number 66 and the historic Motorcraft design. The original has a Ford EcoBoost 3.5 liter V6 engine under the hood, which with over 600 hp has a lot of power to put every opponent in their place. Find out whether you can tame this powerhouse on the Carrera racetrack. The item "Carrera Digital 132 GT Face Off Slot Racing Race Car Set 30012 NEW" is in sale since Monday, October 5, 2020.